Maritime transport is the most energy-efficient way to carry cargo in terms of energy use per tonnage shipped. It is a crucial enabler of international trade, accounting for more than three-quarters of total freight transport activity. The last decade has seen higher global demand for seaborne trade, making it an even more critical factor in the worldwide economy. According to the independent provider of research and consulting services to the maritime and shipping industry, Drewry (https://bit.ly/3zLZ8Hu), the maritime shipping industry generated about $190 billion in 2021, making it one of the most profitable industries in the global economy.

Improvements to operating efficiency in maritime transport can potentially significantly impact the world supply chain economics. Drewry points out that more than 600 containerships are already on order from shipyards. New technologies like dual-fuel ships capable of using carbon-neutral methanol are a part of this capital investment.

Efficiency is not the only challenge facing the maritime shipping industry. If that industry were a country, it would be the sixth biggest polluter in the world. The industry emits some 940 million metric tons of CO2 annually, accounting for about 3% of global greenhouse gas emissions. The International Maritime Organization (IMO) aims to reduce carbon dioxide emissions from international shipping by 40 percent over 2008 levels by 2030. Unless significant mitigation measures are implemented quickly, the IMO estimates that emissions will increase by 50% to 250% by 2050.

The technical issues that make up these two challenges, increasing efficiency and decreasing emissions, represent a fertile field for maritime engineering opportunities. These opportunities include several systems engineering challenges as well. Every oceangoing transport ship is a holon, a system of its own existing between its oceanographic and meteorological context and the systems that make it up (propulsion, navigation, etc.). Understanding the interfaces and relationships among these systems is critical to their function and mission.

Given the current recognition of the need for economic and environmental efficiency, the effort is underway to find ways to move large cargoes using less fuel and creating lower emissions while not creating unacceptable losses of safety or speed across the seas. Additional factors arise from using cutting-edge technologies to create further efficiencies (e.g., reductions in the number of crew required through sophisticated control systems). Much of that work is focused on propulsion systems.

Some of the development focuses on the composition of the fuel driving the vessel’s engines, but there is also exciting engineering work on alternative propulsion. In the first half of the 20th century, cheap fossil fuel-driven propulsion systems replaced commercial sailing vessels. The German ship Pamir, the last commercial sailing ship to round Cape Horn, did so in 1949. The Pamir and her wind-powered sisters succumbed to the larger bulk carriers that could move more cargo faster under combustion-driven power. There are hints at a return to the wind for either supplemental or primary propulsion.

One such return to the wind (pictured above) is currently under design by the Swedish firms Wallenius Marine and Alfa Laval. Called “Oceanbird” by its developers, the design uses the Bernoulli effect as an airplane does. But, instead of a horizontal wing that creates upward lift for an aircraft, the Oceanbird features vertical, deck-mounted “sails” that use their wing-like shape to create a forward pull that propels the ship.

The wing sails are conceived to be the primary propulsion system in open water. Still, the Oceanbird will have auxiliary backup engines that allow for emergency and close-to-shore maneuvering. In case of high winds at sea or the need to pass under bridges near ports, the 131’x 49’ wings can be folded and tilted to reduce their height and exposed surface area.

The first ship projected for the concept is to be a giant car and truck carrier. Scheduled for launch in 2025, the vessel will carry up to 7,000 vehicles and can navigate a North Atlantic crossing at 10 knots. While this is slower than current commercial carriers, the savings in fuel and emissions are expected to be significant. The developers anticipate that the 10-knot speed is achievable with engine use only 10% of the time, reducing fuel consumption by up to 90%.

Another wind-based innovation uses a century-old sail design to take advantage of the wind to propel the ship. It utilizes a spinning cylinder (rotor) to generate a force that pulls the boat forward, much like the vertical wing sails of the Oceanbird.

A concept nearly 100 years old is already being used to reduce fuel consumption in cargo ships. Rotor ships use mast-like cylinders, called Flettner rotors, for propulsion. (Anton Flettner, a German engineer, was the first to use such a rotor to harness the resulting “Magnus force” to propel a ship in an Atlantic crossing in 1926.) The rotors are mounted vertically on the ship’s deck. They turn clockwise or counterclockwise depending on the direction of the wind. When the rotor face on the forward side travels in the same direction as the wind passing over it, it accelerates the wind and decreases pressure, propelling the ship forward. The force generated by this manifestation of the Bernoulli effect is known as the “Magnus Force” after its discoverer, H.G. Magnus. (BTW – This spin is responsible for the change in the direction of spinning balls (think baseball, soccer, and golf) in flight, whether they spin intentionally or unintentionally.)

When the wind blows across the ship from either side, the Magnus effect created by the rotating mast results in a force that moves the mast – and the boat – forward. The maximum force is generated when the wind comes from the side at about 90 degrees to the direction of the ship’s travel, and the cylinder is rotating at three to five times the windspeed. Of course, the greater the windspeed, the greater the thrust forward.

There are several challenges facing the maritime engineers designing the Flettner ships. Like the vertical wing/sails of the Oceanbird, the masts must be safe for rough seas and high winds. They must also be designed to minimize the obstruction created by having tall (50 to over 100 feet) vertical masts on deck. This can cause problems passing under bridges or other obstructions. It can also be problematic for the cranes that load and unload large cargo vessels.

Several solutions have been investigated and used to varying extents. Some ships are designed with collapsible rotors whose height can be decreased by collapsing them inward in sections. Others have used tilting rotors that can be lowered to lie horizontally along the deck. The problem of crane access has been addressed on some container ships by mounting the rotor sails on rail tracks on the ship’s deck. The rotors can then be moved along the tracks to open access to the deck when needed and later returned to their operational positions. 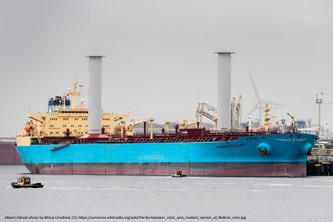 Despite the challenges, Flettner ships are used in various commercial situations. Produced as “Rotor Sails” by the Finnish company Norsepower, the sails have been mounted on tankers, passenger vessels, bulk carriers, and roll-on / roll-off (Ro-Ro) carriers.  The largest Flettner masts (99’ tall by 16’ wide) are mounted on the Maersk Pelican tanker (now renamed the Timberwolf). (Fig. 1) The Danish ferry company, Scandlines, has recently added rotor sails to two of their seven ferry fleet operating daily between Denmark and Germany. Other large cargo ships use one to six masts to assist their primary propulsion systems.

The sheer size of the maritime shipping industry, its interface with the environment, and the logistics of ports it operates cry out for systems engineering help. Ocean carriers, ship designers and builders, and on-shore ports are all candidates for systems solutions. Major carriers like Maersk, CMA CGM, and MSC are even acquiring air cargo and other end-to-end forwarding solutions to offer more complete transportation solutions for their customers while creating even more considerable supply-chain system challenges. Despite the opportunities and challenges, the defense-aerospace-oriented systems engineering community has paid little or no attention to this market. It is time to take advantage of this awakening giant in the global economy.

My Other Posts
As Vice President of Professional Services at Vitech, Zane Scott leads the company’s consulting and training organization. For the past 40 years, Zane has built a skill set that enables him to provide insight and guidance to individuals and companies as they improve organizational processes and methodologies. Zane has also taught systems engineering methodology in a variety of settings, is a frequent blogger, and is co-author of A Primer for Model-Based Systems Engineering. With a professional background in litigation, Zane is also a trained negotiator, labor management facilitator, and mediator. He has practiced tactical negotiation and interventional mediation, and taught communications, conflict management, and leadership skills at both the university and the professional level. Before joining Vitech, Zane worked as a senior consultant and process analyst assisting government and industry clients in implementing and managing organizational change.